Commonwealth Architects is pleased to provide architectural services for The VCU Real Estate Foundation to rehabilitate the historic Richmond Glass Company in Richmond, Virginia, into a facility that will house two programs from The VCU School of the Arts. 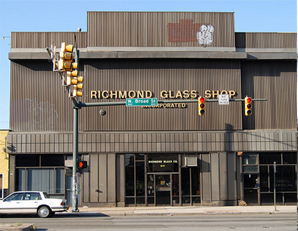 In our practice of architecture, it doesn’t get any better than this. There is just something about an abandoned historic building. We can’t wait to discover its story before getting the project “on the drawing boards” to create an innovative design for reuse that honors the structure’s character and history.

With open volumes and vaulted ceilings, the early 20th century building is well suited for the space required by the School of the Arts. It will house a dance studio for the nationally-known VCU Dance Department as well as a Kinetic Imaging Studio for students to engage in video, animation and sound media production.

The Richmond Glass Properties include four buildings – the large terminal/storefront building and three storage buildings to the rear. Two of the buildings will be connected with the construction of a new infill addition. The rehabilitation of the buildings and addition will provide more than 37,000 square feet of space to meet the programmatic needs of VCUarts.

Click here to read more about this project in Richmond BizSense.