Commonwealth Architects’ rehabilitation of The Patrick Henry Hotel in Roanoke, VA, was awarded the 2012 Outstanding Preservation Project Award by Preservation Virginia. The award was presented on September 24 at Preservation Virginia’s annual conference held in Leesburg, VA. The once elegant Patrick Henry Hotel has been transformed into a mixed-use project that revitalizes a significant landmark in downtown Roanoke. Built in 1925, the 155,000 square-foot, 10-story hotel was part of the construction boom that swept the city in the decade after World War I. 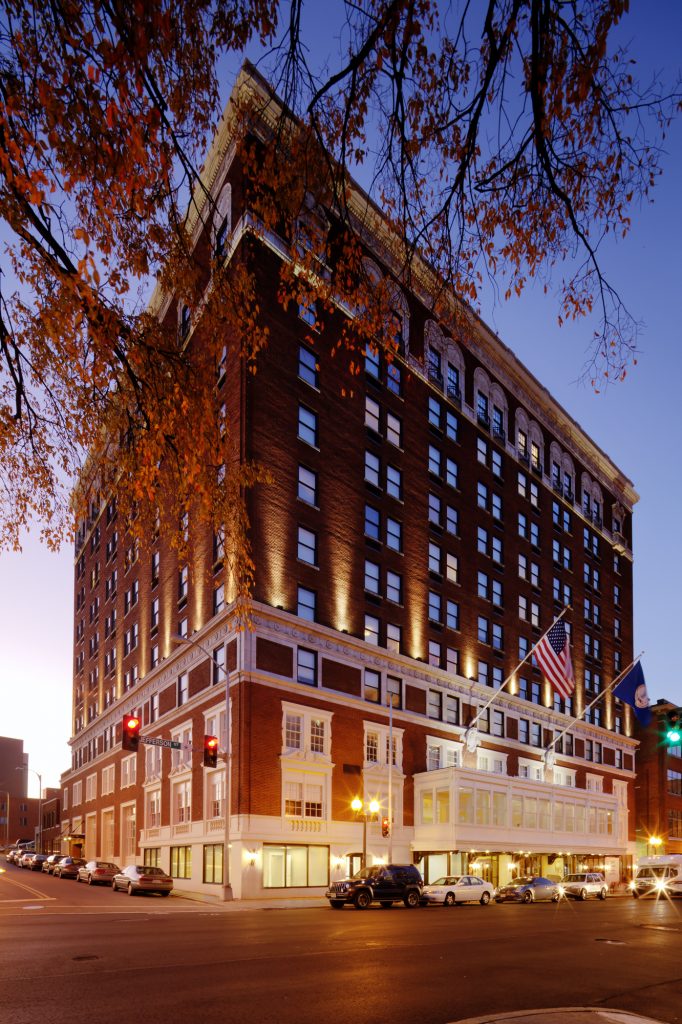 A sentimental favorite in Roanoke, the brick and stone hotel has been rehabilitated into 132 apartments with commercial uses on the lower floors. The project followed the standards set forth by the Secretary of the Interior’s Standards for Rehabilitation and will receive state and federal historic investment tax credits.

Commonwealth Architects provided architectural services to restore the neglected structure to its former glory. Today, the Patrick Henry has been reborn as a vibrant place for living, dining, and entertaining. It now has an upscale restaurant, a coffee shop, a fitness center, and a bar incorporated into the lobby design. The antique chandeliers have been painstakingly cleaned and repaired. The Patrick Henry Ballroom looks like new, with replastered cornices, fresh paint and gleaming floors. An old faux skylight above the atrium, which had been hidden by a dropped ceiling, has been uncovered adding to the sense of space and light inside the former hotel.

The rehabilitation of the Patrick Henry preserved a historic landmark for the Roanoke community. It fulfilled the vision to return a historic structure to its former prominence in the life of the city. A decade ago, Roanoke’s downtown largely was a place where people did business by day and drove home to the suburbs by night. The transformation of the Patrick Henry is a vital piece of the ongoing revival and a growing urban lifestyle in downtown Roanoke.

In July, The Patrick Henry project received a top honor from Virginia Business magazine. The rehabilitation was honored as the Best Historic Rehabilitation of 2011 by the magazine and was featured in its July 2012 issue.

Several new businesses have opened in the project including a bar in the lobby, a coffee shop and a restaurant. All of the building’s 132 apartments have been rented, many to students at the nearby Jefferson College of Health Sciences.