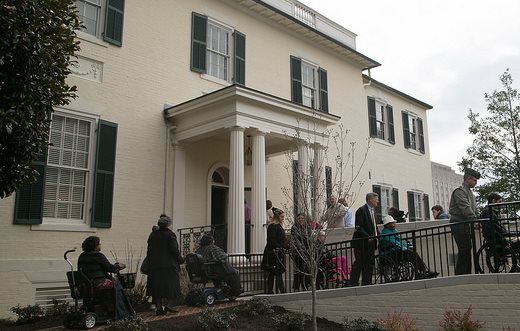 Paralyzed Veterans of America (Paralyzed Veterans) announced it has awarded the 2017 Barrier-Free America Award to the Virginia Governor’s Mansion, for accessible architectural design demonstrating the importance of equal access in the built environment for all individuals with disabilities.

Virginia Governor Terry McAuliffe and First Lady Dorothy McAuliffe were notified earlier this year that the mansion would be honored for its accessible design.  They released the following statement:

“It is very important to us that the Governor’s Executive Mansion is open and welcoming to all of its many visitors.  We made it a priority to take a thoughtful approach that preserved the historic character of the home, while ensuring people with disabilities can enter with ease and dignity.  We are honored to accept Paralyzed Veterans of America’s Barrier-Free America Award on behalf of the people of Virginia, and the dedicated team who made this commonsense idea a reality.  We celebrate this moment with Paralyzed Veterans, and thank them for all they do to make America’s public spaces free of barriers for our nation’s veterans and all people with disabilities.”

The Governor’s Mansion, known as “The Executive Mansion,” is located at the heart of Richmond, the Commonwealth of Virginia’s capital city.  It is one of America’s oldest executive residences, sitting within the gates of a park-like area that includes the state capitol building, which was designed by Thomas Jefferson.  The Executive Mansion has been the home to Virginia’s governors since 1813, and Governor McAuliffe is the 55th governor to reside there.

Yet, until last year, visitors with mobility disabilities had to enter the historic landmark through the basement, at the back of the building. In March, Governor McAuliffe debuted an accessibility facelift for the national historic landmark. Now, wheelchair users and all those with disabilities can enter the mansion via a ramp that is connected to an existing breezeway leading to the southern entrance on the first floor of the mansion. The first floor is the formal reception area used to welcome visitors and guests.

Click here to view the full news article on www.pva.org.