New Year, New Projects: Former Ramada Inn to be the “Gateway to Petersburg”

Driving down I-95, the former Ramada Inn stands as a prominent reminder of the economic troubles that have plagued Petersburg’s past. Commonwealth Architects and C.A. Harrison Companies have teamed up to breathe new life into the once distinguished Hotel and transform it into the centerpiece of a new mixed-use development. “You drive up and down 95 and you say, what a shame, there is a missed opportunity here. It’s great to come back and do a gateway building that makes a statement about what Petersburg is and what it can be,” says Lee Shadbolt of Commonwealth Architects.

Built in 1973, the hotel was originally a Ramada Inn. Having switched names several times, it was most recently converted to a Fort Lee Regency, before finally closing its doors in 2012. The existing 120,000 square foot, 10 floor hotel structure will be completely renovated into 125 hotel rooms and suites. The new hotel will meet current industry standards and feature a full list of amenities including meeting rooms, conference rooms, bar, fitness center, indoor pool and outdoor courtyard. 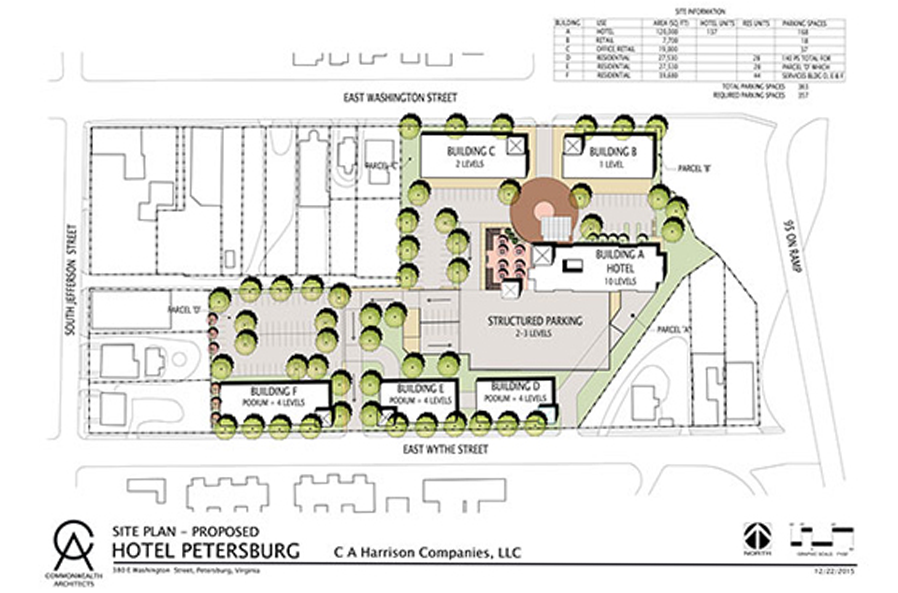 The development, located at 380 East Washington Street, will be the beginning of a new vision for this Petersburg neighborhood by providing a vibrant mixed-use interaction at a crucial intersection of Interstate 95 and East Washington Street. It will include several parcels surrounding the hotel on East Washington and East Wythe streets. These tracts will be converted into a complex with 26,700 square feet of retail and office space and up to 100 residential apartment units. Chris Harrison, managing partner of C.A. Harrison Companies, said about $20–$25 million will be invested in its entirety. The company wants to start construction by June, with the hotel opening in 2017.

Harrison echoes Shadbolt’s earlier sentiment, “I think it is going to be a great development for the city and the state. It was successful in the past; I just think the property was mismanaged. Petersburg is going through a renaissance in terms of economic development. This will be a gateway project for the city.”

Commonwealth Architects and C. A. Harrison Companies are not new to working together. The two teamed up to work on the recently successful mixed-use giant, Plant 64, in Winston-Salem. Harrison also plans to use the same construction and program management services, Capstone Building Corporation and Innova Services Corporation.

C. A. Harrison Companies focuses on revitalizing transitional neighborhoods. When possible, the company acquires neglected buildings and substantially rehabilitates them to their former grandeur. Through several years of close management and oversight of their development projects, C. A. Harrison Companies has acquired substantial expertise in the acquisition and construction of quality urban housing in the metropolitan DC region, Central Virginia, and the Carolinas.